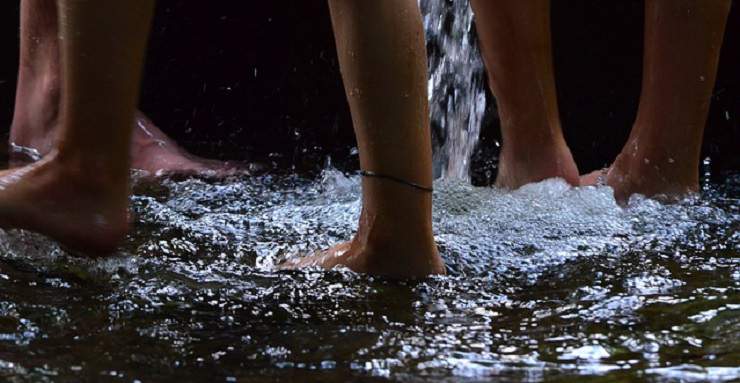 Are you interested in natural treatment of plantar fasciitis? You can find references to and recommendations for a number of natural treatments if you search the internet. Whether any of these will work for your situation is the key question.

This post will focus on two types of alternative treatment for plantar fasciitis – Epsom salt foot soaks and anti-inflammatory herbs.

As noted in this site’s Sore Heel Pain Treatment post, there seems to be two lines of thinking as to the causes of and treatments for plantar fasciitis.

The common line of thinking, still mentioned by authoritative sites such as Mayo Clinic, goes along with the belief that plantar fasciitis pain is due to inflammation caused by micro-tears in the fascia.

A second line of thinking, described in What is Plantar Fasciosis?, indicates that the pain is a result of micro-tears and deteriorating cells caused by limited blood flow. This belief flows out of a 2003 study of fascia tissue taken from 50 pf patients, none of which showed any problem with inflammation. 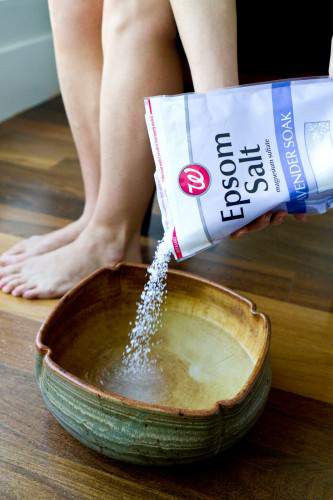 If you study both medical, authoritative sites, and personal sites (similar to this one), you will find that a number of websites mention Epsom salts and hot water as a home treatment for plantar fasciitis. They indicate that hot water and Epsom salts will draw inflammation out of the sore muscles. For this to be true, one has to assume that inflammation exists and is causing the pain.

For example, the MotherNature site agrees with this assumption. They recommend a 20-minute Epsom salt soak with one tablespoon of salt per quart of water. Simply dissolve the salts in warm water and let your feet soak to relieve the pressure due to the inflammation as the swollen tissues drain.

Epsom salts have numerous uses and benefits that can help soothe the mind and soul, in addition to the body, by the way. You can read more about Epsom salts on the SaltWorks website.

One caution: if you are diabetic, recognize that soaking in salts may dry out your feet, so be sure to rub cream on your feet after you are done soaking.

According to HerbWisdom.com, ginger can help reduce the symptoms of numerous body issues. Ginger has circulation-increasing characteristics and is commonly recommended as an anti-inflammatory for arthritis and joint problems as well as foot issues.

Ginger has long been used in Chinese society as a medicinal herb. It is a well-used plantar fasciitis treatment.

Due to its many positive capabilities, the MotherNature site recommends making a habit of using ginger. They suggest you buy it fresh at the supermarket and mince between a half-teaspoon to a full teaspoon per day. Once it has been minced, mix it into your food or stir it into water and drink it.

Note that there are a number of warnings related to use of ginger. If you have acute inflammatory conditions, if you are taking warfarin, or if you have heart problems, high blood pressure, or gall stones, be sure to consult your physician before embarking on a ginger treatment.

At the EarthClinic website you can read, in the responses, about several natural herbal remedies that community members have used.

A commonly noted herbal treatment was apple cider vinegar. Several community members claimed their plantar fasciitis pain was eliminated in just a few days simply by drinking a mixture of two capfuls of organic apple cider vinegar in eight ounces of water. The key, they noted, was to make sure the cider was organic.

One community member wrote that they followed this advice and the pain was gone in two days after suffering with the pain for a full year.

Quite often members commented that they also added baking soda in with the apple cider vinegar in the water. Some added honey or molasses to soothe the bitter taste. A suggested mixture was two teaspoons of apple cider vinegar, one teaspoon of baking soda, and one of honey per six ounces of water.

I must add that a few community members commented that the apple cider vinegar treatment did not work for them at all.

Cloves, turmeric, and garlic apparently can have similar effects on the body as garlic does, however, all of these are less studied. There is little documented testing to show whether or not these will have any effect.

So, remember this – no one treatment works for everyone!

If you intend to try any of these home treatments, recognize that they may or may not work for you.

Have you tried any of these natural-type treatments? Did they work? If not, what do you think about these ideas?