Thus, according to medical records, plantar fasciitis is one of the most common reasons for doctor visits in the United States. In fact, it is reported that more than one million visits every year are related to this type of heel pain.

Why is it so common in the United States? Is it the same in other countries? Apparently, it is quite common in most “modernized” countries. This is not the case in countries where people still walk barefoot most often, however.

Let me elaborate on this some more. But first, some history…

Back in 2003, Temple University podiatrist Harvey Lamont published information in the Journal of the American Podiatric Medical Association regarding a study he had done based on 50 heel spur patients who suffered from chronic plantar fasciitis.

Dr. Lamont had harvested small amounts of plantar fascia tissue from the feet of these 50 patients during surgery. In each surgery, he had cut the fascia tissue away from the heel in order to relieve the pain.

As he studied the fascial tissues, Dr. Lamont found that his patients did not have a problem with inflammation. Instead, the damage of plantar fasciitis was shown to be related to micro-tears in the plantar fascia ligament.

This discovery was contrary to the popular belief that had existed for more than 20 years, that plantar fasciitis was due to inflammation of the plantar fascia tissue.

Discovering a Potential Cause 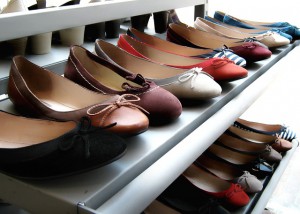 In addition to the micro-tears, Dr. Lamont also found that there were dead cells in each of the fascial tissue samples. Cell death, called necrosis, is commonly related to having limited blood flow in an area of the body. The limited blood supply causes some of the cells in the area to degenerate and then die.

When a Portland podiatrist named Ray McClanahan read this study he began to wonder what might cause this damage. He concluded that it was, in fact, a problem of reduced blood supply in the sole of the foot.

Most of the blame was placed on our common footwear that was distorting the shape of our feet, particularly our toes. According to McClanahan, modern shoes not only squeeze the toes due to a tapered toe box, they also tend to pull the toes upward. These two things stress the muscles that allow us to wiggle our toes, pushing the big toe inward toward the center of the foot as well as upward, out of its normal position.

The resulting misalignment of the toes can then begin to pull on other foot structures. These foot structures may in turn pinch an important artery, the posterior tibial artery that carries blood to the bottom of the foot.

Such pinching may then reduce the flow of blood near the areas where plantar fasciitis pain occurs. Over time, degeneration of the fascia begins to occur. 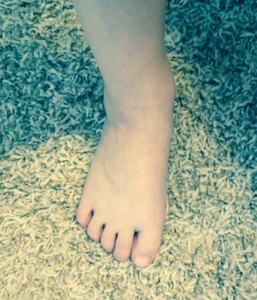 For an example of what can happen to our feet, first look at the feet of a child. A normal child’s foot will be wider at the toes than at the ball of their foot. The two example pictures shown here are of my 4-year old grandson’s foot (he kept curling up his toes) and my almost 2-year old granddaughter’s foot (who doesn’t stand still).

Now look at your own feet. Are your toes wider than the ball of your foot? Perhaps they still are if you are young. When I looked at my 60-year-old feet I found that my big toes, in particular, were bent inward significantly, just as in the picture at the top of this post. 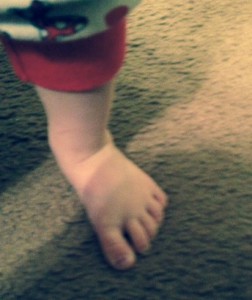 I can easily believe that this is due to wearing shoes most of my life. I never was one who liked to go barefoot!

Let me be clear. This is not at all to say that there aren’t other factors or reasons for heel pain. The 17 Common Causes of Heel Pain article on this website discusses other potential factors.

Since the research showed that the plantar fasciitis issues of these 50 patients were not a result of inflammation, Lamont stated that plantar fasciitis was not a proper term to use to describe this type of heel pain. Instead, he argued, it should be properly called plantar fasciosis.

Why change? Because the “itis” in fasciitis means “inflammation,” which no longer appeared to be a correct description. On the other hand, the “osis” in fasciosis referred to an abnormality of any type.

The following video produced by Dr. McClanahan discusses the difference and provides his explanation of the effect of our modern-day shoes.

The Next Important Steps

If this makes sense to you and you are either suffering from plantar fasciitis-type heel pain or want to avoid it in the future then most importantly, find some shoes that allow your foot to be in a natural position. This means having the heel and forefoot level and toes level with the ball of the foot.

The shoes should allow the toes to spread out wide, as they should be. To enable this, the toe box of the shoes must be the widest part of the shoe. There should be no toe spring upwards and the shoe must be flat.

Also, consider the importance of appropriate exercises to ensure the strengthening of your feet and even the re-adjustment of the body’s normal toe structure. You can learn about Dr. McClanahan’s recommendation on the Toe Extensor Stretch post.

Considering what you have read and heard in the video, what are you thinking? Is this new to you? Does it seem like a valid interpretation of Dr. Lamont’s study?

7 thoughts on “What is Plantar Fasciosis?”