It is a well-documented fact that running and heel pain go together quite often. According to competitor.com, heel pain in runners eventually affects about 10% of the running population.

My son-in-law Eric is a runner. He has been running marathons for 8 or 9 years now. Eric loves running but only competes to better his own times.

Shortly before initiating this website I discovered that he had been suffering with plantar fasciitis. So, I interviewed him and am presenting his story here. I have written the following story from his perspective.

My first symptoms appeared about a year and a half ago, experiencing significant heel pain after running. The pain kept getting worse over the next few months. As is normal with plantar fasciitis, it was especially painful at night.

In fact, it got so bad during the night that when I got up to use the bathroom my wife thought I was dying or having a heart attack. I could hardly walk. When I did walk around a little bit the pain began to go away.

As I researched my foot problem I began to expect that I was dealing with plantar fasciitis. The more I read, the more it became apparent that this was my issue.

So, based on my research, I began to increase the amount of stretching I did and also learned how to massage my legs, ankles, and foot.

I had been doing some of the recommended exercises previously but I increased the amount of Achilles tendon and calf muscle stretches. I also added some new exercises aimed at stretching my plantar fascia.

Recognizing that my calves tended to be tight, much of my massage focused on my legs and ankles. 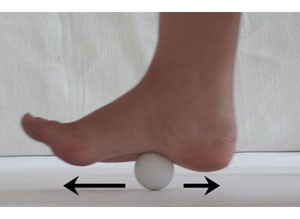 To be honest, this provided some pain relief but it was not as effective as hand massages or a night splint.

I didn’t actually buy very many products because the stretching and massaging was helping.

It wasn’t long, however, before I purchased a simple Futuro night splint. This helped stretch my plantar fascia during the night and reduced the level of the nighttime pain.

As I look back on this whole episode, I have to believe that it all started from overuse. I had been trying to increase my running time in preparation for upcoming races. From my research, I now know that increasing running time too quickly or too much is a common cause of plantar fasciitis among runners.

Knowing this, I have changed my running patterns. I used to try to run one hour each day but now I run about 30 minutes on weekdays and take longer runs on the weekend. This has reduced the stress on my foot and given it more rest.

It has taken a while but most of the pain appears to have gone away. Now I consider myself to be in more in a preventative mode, continuing with my increased stretching and massaging.